I'm in a Cloris Leachman mood.


I couldn't find any clips from "Kiss Me Deadly," but Phyllis was pretty hot. I saw her hiking once, she had little arm weights and looked great. (Wait! I found it. Cloris wasn't tagged!) One hell of a movie opening:

Posted by Donna Lethal at 12:01 AM No comments: 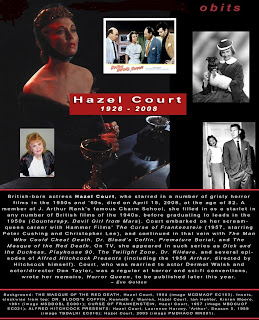 Enter Misty Mundae. Blessed with a kisser that is all doe-eyed innocence and a lithe body that suggests the strong possibility of a myriad of sinful activities--the 22 year-old brunette seems like the perfect choice to quarterback Seduction Cinema's endless assembly line of ready-made sexploitation epics. Sensing this, SC has signed Mundae as their first exclusive "Seduction Cinema Girl."

But, as Mundae says herself--in other ways--she's an extremely unlikely candidate for the job of being a direct-to-video sex kitten for hire. For one thing--she's no dope. Mundae's a college student who has been known to regularly muster up a grade point average that lands her on her school's Dean's List. Also, she seems none too impressed to learn that she numbers amongst her fans bimbo-friendly radio shock jock Howard Stern. On top of that, she's already showing that she's capable of being much more than just another hot chick with her recent debut as writer and director (as well as star) of "Lustful Addiction" and "Confessions of a Natural Girl."

And with other upcoming roles in SC movies like "SpiderBabe," "Lord of the G-Strings" and "A Beautiful Behind" (they do love to parody mainstream films over at Seduction Cinema) there should be plenty more to see of Mundae for some time to come.

How did you initially hook-up with the Seduction Cinema people?
Well, originally I started working on movies with Factory 2000 when I turned eighteen. The videos we were producing at the time were really low budget, and more obscure fetish fantasy (a la bondage, strangulation, slasher, whatever!) About three summers ago I received a part in Seduction's "Gladiator Eroticus," just because I was kind of buddies with director John Bacchus, whom I had met through the Factory's Bill Hellfire. Apparently, everything kind of snowballed from there. Before I knew it I was starring in practically every feature that they produced.

Had you done much acting prior to that?
No, not really. Even when I first casted for roles through Factory 2000 and later other directors, it was all so accidental. I have always enjoyed acting, and of course expressed a lot of interest in independent films and such, but I never had the intentions of becoming an actress of breaking into this particular industry. For these specific types of roles, I would think that a lot of formal acting training would destroy you. It's not something to be taken too seriously. All you really need is a natural knack for the make-believe, and a good sense of humor.

They've just signed you to an exclusive three-year contract as an actress and writer/director. How did this all come about?
THREE YEARS! Oh shit. I must have not read the fine print. Actually, I'm under contract until February. And I must admit it's actually pretty fucking cool. I'm very well taken care of. I think that a big factor for having been contracted has to do with all the crap (I'm using the term loosely) that is being put out there, especially within this genre of filmmaking. Although there are a lot of very inspiring new directors out there, a huge portion of them are poorly executing their adolescent pipe dreams. I'm not trying to toot my own horn, or anyone else's at Seduction Cinema, for that matter, but the fact is that they are professionals, and they are extremely cool to work for. Under contract I really don't have to worry about being exploited or underpaid for some obscure half-assed video that will never even see a release. And I guess from their end, it's preventing HBO from snatching me up and paying me exorbitant amounts of loot that they could never match! I'm exaggerating.

What can you tell us about "Confessions of a Natural Beauty" your writing and directorial debut?
It's modest really. I didn't want to attempt anything too self-righteous. It was an experiment, and I didn't really want to get in over my head. I see a lot of new directors struggle to ever even complete the film that they invested so much passion into. I have tons of ideas for intense and in depth feature films, but I think it would be very audacious to attempt something of that nature for a two day shoot with one location and the allotted budget. It's just a simple, cute story about young girlie love. But I really enjoyed working on it, and hopefully people will dig it. I do!

Is writing/directing something that you've wanted to do?
Yes. Well, once you've worked in front of the camera enough times, and you see what goes into the production end of film making, I think almost everyone thinks to themselves, "Hey, I've got an idea for a flick!" Working on these indie movies you also get a reasonable amount of input on other peoples projects. Finally you come to this recognition that any input is viable, and people do want to hear what you have to say.

Did you feel like you did a good job--being a first-time director and all?
Growing pains, ya know. There were plenty of obstacles, and certain things went smoother than I had anticipated. I'll be the first to admit that I have a lot to learn, but I'm anxious to figure it all out and come into my own.

What were the biggest challenges you faced in doing the movie?
Well, obviously I'm at best a technical novice. I had a great crew to assist in lighting and sound, and all of the other important factors that I would probably have royally fucked if I had attempted it on my own. On the other hand, although I understand why it is so important for a really competent director to thoroughly master all of these aspects, in the huge scheme of everything, things like lighting and editing are rarely expected of the director. And I'm certainly glad that they were not solely expected from me, because it allowed me to concentrate more on the bigger picture.

How about the upcoming "SpiderBabe" project? What are you going to be up to in that one?
Well, it is yet to be definitively cast. I'd definitely be up to the challenge of taking on that role. Quite frankly, I'm pretty curious to see how they are gonna pull that one off.

You're also keeping busy with movies like "Lord of the G-Strings" and "A Beautiful Behind." Aside from having way more sex--will these movies actually resemble the mainstream films you're parodying at all?
I haven't really been doing my homework. I've yet to have seen "Spiderman", "A Beautiful Mind" or "Lord of the Rings". So, in other words, you are asking the wrong girl.

You have kind of a "girl next door" look, but what are you really like?
Well, that's a pretty broad question. Although, I think that the "girl next door" label is appropriate. I am certainly not the most likely candidate for the soft-core film industry, and most of my acquaintances are usually astounded to learn of what I do. I'm not all about promoting myself, or my image, or tying to "make it" in the movie biz. I go to college and make the Dean's list. And beyond that, I usually like to stay in my pajamas until about four in the afternoon (work and school schedule permitting) and sit around all day playing guitar and watching the game show network or listening to records.

Howard Stern has declared himself a fan of your's. How do you feel about that?
Hmmm. Interesting. Well, I can't say that I am a fan of his.

Do you take this stuff seriously, or is it all kind of a lark for you? Do you have other aspirations?
I take it seriously just in the sense that I really like and respect all of the people that I work with. I want to be as professional and cool to work with as possible, so I take it seriously to an extent. Do I study my lines or pursue acting classes? Hell no! In fact I rarely even read the script until showing up on the set. I have plenty of aspirations beyond my movie career, but I'm usually just living in the here and now.

What sorts of movies would you like to make in the future?
I'm not telling. I did one interview in which I divulged a couple of my ideas, and already people are trying to rip me off and cramp my style. So, you'll just have to wait and see.

It is rare that I get excited about a movie based on the trailer, but I can't wait for ZOMBIE STRIPPERS to be released. From the trailer, I can gather that it has two plot devices that I really enjoy in cinema:

I know that this movie will probably suck, but what a concept! You just know Ed Wood is smiling down from Heaven.

Damn you all to HELL!

Charlton Heston had to go kick it, which means that "Attack of the Crab Monsters" got kicked off TCM's schedule tomorrow night.

Email ThisBlogThis!Share to TwitterShare to FacebookShare to Pinterest
Labels: B movie, monsters

Singing For Your Supper

Lee Majors croons "The Unknown Stuntman" for THE FALL GUY

Oddly, the only clip of this on YouTube is the punchline of a very bad assisted suicide joke.

And the most awsomest of all....