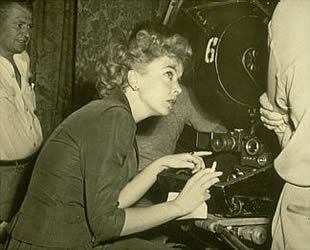 Lupino was a 1940s film star at Warner Bros. (Lupino often joked that she may have been the "poor man's Bette Davis" as an actress.) After a suspension from Warners in 1947, she focused on getting behind the camera. In 1948 she and her husband Collier Young formed their own filmmaking company, The Filmmakers. In 1950, when the director of "Not Wanted" suffered a heart attack, Ida took over as director; it was the start of another career for her. She began directing full-time, mostly 50s film melodramas, and was one of the few women of her era to achieve success in this field.

Lupino continued acting throughout the 1950s, 1960s and 1970s, and her directing efforts during these years were almost exclusively television productions such as Alfred Hitchcock Presents, The Twilight Zone, The Donna Reed Show, Gilligan's Island, 77 Sunset Strip, The Ghost & Mrs. Muir, The Rifleman, Bonanza, The Untouchables, The Fugitive, and Bewitched.

Watch her episode "A is for Aardvark" - the definitive fan-fave Bewitched episode. Originally, The Ashers (Bill and wife Liz Montgomery) wanted to do a sitcom called "The Fun Couple" about an absurdly rich heiress who marries a car mechanic. Eventually they were steered into the supernatural angle of witch marries mortal. The touching scene towards the end of this episode reiterates the show's core premise: that witchcraft (or rich-craft) is no substitute for love, affection and goals achieved through your own merit.

Ooh - good one on (Aunt) Ida. She was a real pioneer and a great actress in her own right.