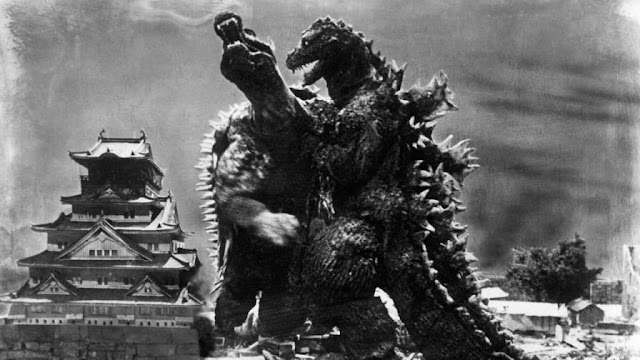 This is the second Godzilla film, coming only months after the first was released and it already gave us a signal of what was to come next for series in the next decades. While the first was a moody, political tale of the atom bomb, this one goes in the simple "giant monsters fighting"  direction pretty much immediately.

A plane is down on an isolated island and the pilot's best friend has flown there to save him. They immediately run into Godzilla, who has inexplicably survived dying in the first film, fighting Anguirus who resembles a porcupine/dinosaur hybrid. They fall into the ocean and soon are taking their personal issues to the coast of Japan. At first Godzilla arrives and is lead away from the sure by "light bombs" but that plan falls short when escaped convicts crash a truck into some sort of oil refinery causing a much bigger sours of attention for Godzilla to latch onto. Anguirus arrives and they go on a rampage, destroying everything in their paths.

There is a love story of sorts where the bridegroom gets killed trying to stop Godzilla and a big company relocates as a result of the monster damage so we get to hear about that... but who cares about the human parts? Unlike the first outing where human interactions actually meant something, this movie created the path all others would follow... threadbare human story to pad out the master battles. And there are plenty of monster bottles in this one! Known for "man in a monster suit" effects this film seems to have its share of that mixed with equal amounts of hand puppets. I would not say it is ineffective, however. The effects overall are pretty good for such a quickly produced, low budget production.

In the end Anguirus is defeated and kill by the king of the monsters and the king himself is buried in a mountain of ice. Never to return again, Well until 1962 when Godzilla VS King Kong came out.

I had to confess this was the first time I saw this film. I grew up seeing the Godzilla series at the local Everett Park theatre just outside of Boston and on TV when we got a TV in the side 70s but I somehow missed this gem. I think the local movie house limited itself to colour films and this is black and white and this might have somehow fallen through the cracks in the TV creature double feature distribution deal.

If you like Godzilla films... you'll love this one. It is not to be taken seriously but it's a lot of fun and doesn't disappoint for monster on monster action.
Posted by Behemoth media at 10:08 AM