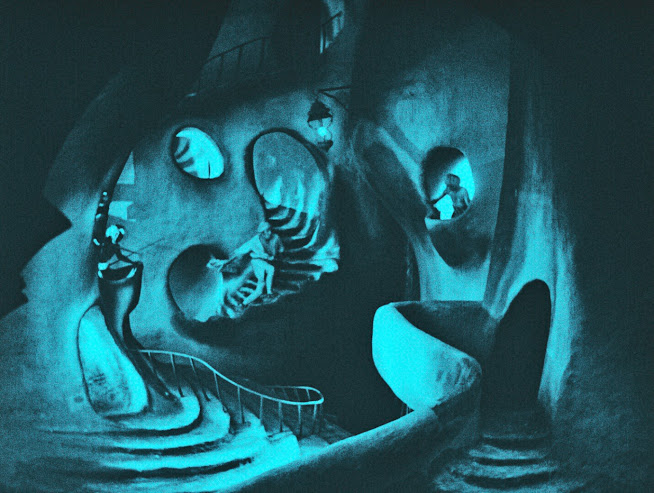 There are three main reasons to watch this silent film.  Emil Jennings (Caliph of Bagdad), Conrad Veidt (Ivan the Terrible) and Werner Krauss (Spring helped Jack). Such a test should be enough but the wonderful cinematography, sets and great cutting and superimpositions life this anthology film to a higher level. A poet is hired to make up stories about an exhibitions main wax figures and each one plays out with him and the proprietor's daughter as the love interests in each. The three sections are imaginative, I'll give it that and it ends in a surreal chase. The set pieces are reminiscent of the expressionist classic, Cabinet of Doctor Caligari but not quite as out there. Close, but not quite.
Posted by Behemoth media at 6:47 PM No comments: 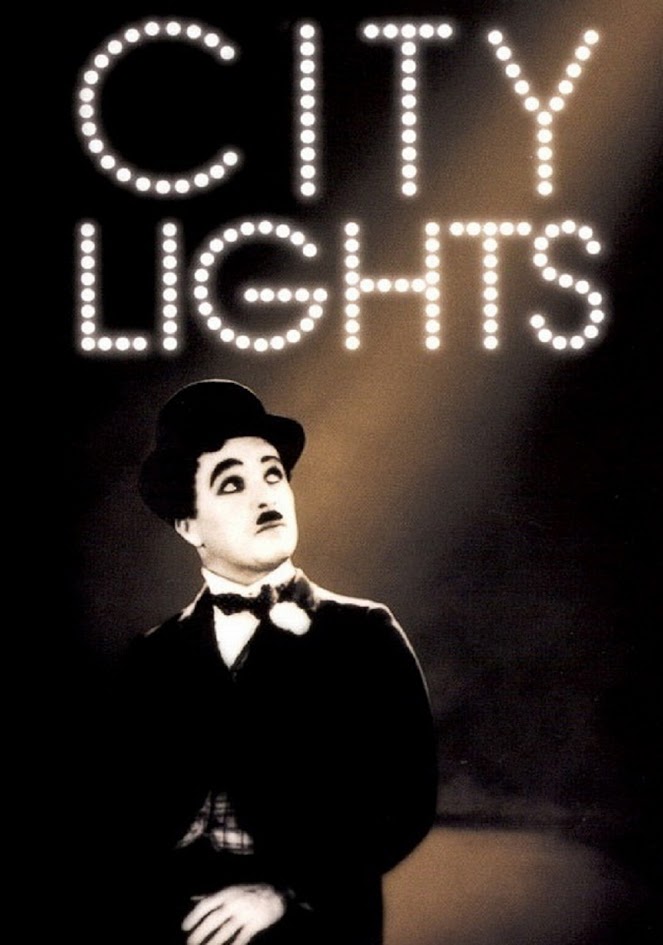 Made several years after sun was taking films by storm, Charlie Chaplin defied the odds and produced not only a work of art but a huge hit in this silent film. He would avoid sound another few years but this is considered one of his best projects.

The little tramp character befriends a millionaire after stopping him for committing suicide who helps Chaplin by giving him money so that a blind girl, the tramp's love interest can have an operation restore her vision. When the rich an is robbed and the tramp is found with  a ton of his cash, things get complicated. The tramp evades the police long enough to pass the cash to the girl but is soon arrested and put in jail.

After being released he sees the girl in a flower shop window, the girl comes out and replace a crushed flower he is holding and when she touches his hand she realizes who he is and they smile at each other.

Well acted, filmed and maybe a little sentimental the film still has impact and can touch your heart like few other movies can. Chaplin is a master of his medium and this is considered by sum to be his masterpiece.

Posted by Behemoth media at 1:58 PM No comments:

The Mark of Zorro (1920) directed by Fred Niblo 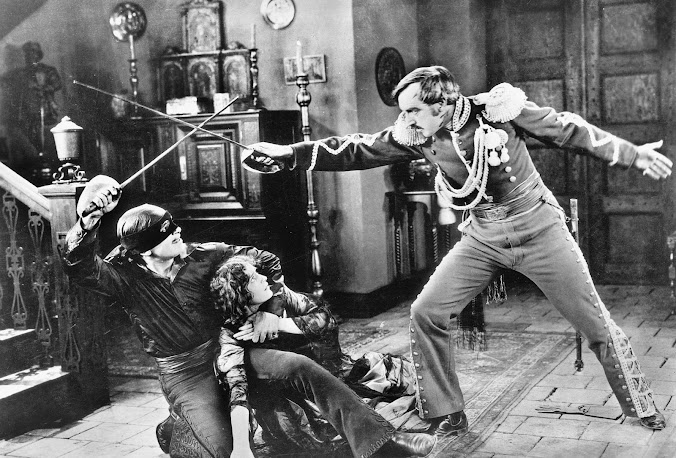 This original film version the Zorro legend is a pure delight. At this point we all know the story of the rich dandy courting the beautiful woman who finds him annoying but is also the dashing hero of the people, Zorro who cuts the faces of evil doers with sword, leaving his trademark "Z" on them as a warning to others.

This is the role that catapulted Douglas Fairbanks to international fame and it is no mystery why. His dual role is done with an amazing amount of humour and his physicality and joyful energy in the role has never been matched. The sword fighting and the amazing stunts are still thrilling to watch and done with a grace and sense of fun that just keeps you engaged with the film from start to finish.

Fairbanks produced the film and adapted it from the the 1919 story The Curse of Capistrano by Johnston McCulley as well as playing the titular role.

I was introduced the character by the old TV show and have a soft spot for Zorro I have to admit. He was in some ways the inspiration for another vigilante of justice, Batman. In the comic, Bruce Wayne's parents are killed after seeing this this film so it's no wonder why the grieving child took on the role of a masked hero. To be honest this film would many anyone want to do that.

Posted by Behemoth media at 6:52 AM No comments: 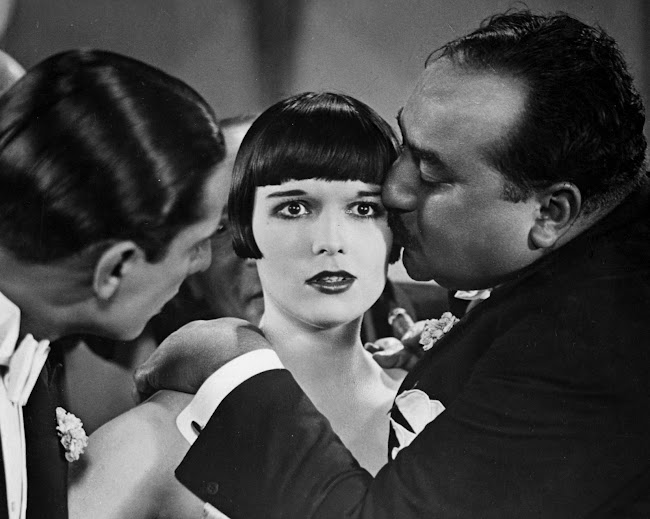 This one of my favourite films and one of the best films of all time. If that sounds over the top, watch this and see for yourself. Even today, the actions and personality of the lead character, Lulu, is iconic and unmatched almost 100 years since the film's release. Playing the lead, Louise Brooks created something unique... an image and look that survives to this very day. She is more than just one of the most beautiful women of all time... her character is so full of life and ch charismatic is just pouts out of the screen into the viewers eyes. He haircut and look literally influenced the entire flapper era and Lulu's lust for life and new experiences is infectious. Look toward almost any advertisement, decoration almost anything from the flapper era and Brook's image is on it.

Pabst and his team took Brook's natural talent and brought it to life with amazing photography. Every frame could be a still photo. This is German film so it goes the way many did and have gone since...right into a nightmarish world of horror and depression but it's so well done and you are so caught up in the main character's story you just can't stop watching as it all starts going from fun to tragedy.

The plot is complicated, involving a devil may care young woman who is basically sleeping wiht almsot everyone else in the cast including her fiancé, his son, an acrobat and some woman she knows. Somehow they mange to present this behaviour as freeing and endearing and beyond the prudishness of that and to be honest, this generation. Lulu isn't looking to hurt anyone... at least not at the start.

It was inevitable that such a free spirit would get herself into trouble and boy does she ever get into trouble. Her fiancé is not happy catching her with so many people during their wedding reception and orders her to kill herself. They struggle with a gun and he is accidentally killed, the door to the room opens and the guests see her holding the smoking gun with his head buried in crotch - one of the most memorable shots in cinema history.

Her dead husband's son helps her escape to London to avoid going to prison for murder with some of her other associates but it all goes down hill from there, leading her into prostitution and a shocking ending that even for a film this old, if you have never seen it, you won't see it coming.

Anyone I can get to watch this movie finds it shocking and intriguing. Louise Brooks is mesmerizing. Too many people are unfamiliar with silent cinema to know it was not all Keystone Cops but often poignant, complex and talking about subjects that even today people find controversial and scandalous. I cannot imagine something this wildly free being made today.

Posted by Behemoth media at 2:17 PM No comments: 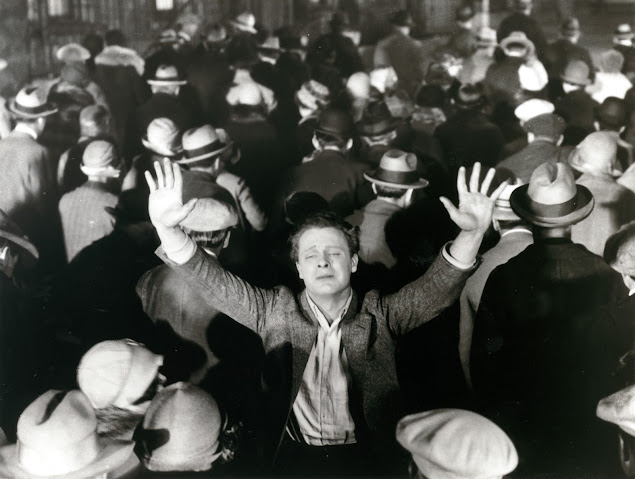 This film is one of the all time classics of cinema. Made in 1928, it follows the life of a «nobody» born on July 4 who has asperations of grand things in his life. Wherever he goes, whatever he does, he does not really distinguish himself from the crowd or society, which in this film becomes a character in of itself, always present and taking away his space, always surrounding him and restricting his movements in some way. The lead character is (played by James Murry) and, in fact, the whole story is morally ambiguous. He seems a total egotistical jerk, concerned only with his own delusion that he is better than everyone else - somehow... he has no clear idea why. His life is a mess and so tragic you can’t help but feel not only sorry for him but for yourself. Who amoung us hasn’t has big dreams only to find they were in fact, impossible to reach no matter what efforts made? He and us all have to learn to live in the world we get, not the one the one we wish we could live in. As a result, the film is thoughtfully indifferent to him all the way to the happy/bitter end. The last shot is haunting. It is at the same time hopeful and defeating as the main character start to put his life together and find happiness again we realize he will never differentiate himself from the crowd around him.
Visually, the direction by King Vidor is outstanding and the effects top-of-the-line. Some fo the images so powerful they stick on your head long after the film is done. For me the shot of the parents in the window watching helplessly as their daughter is accidently hit by traffic, the mother moments ago waving a doll he bought her now slumped against the window with the doll clutched in her hands show just how powerful silent films were and still are to those of us open enough to watch them. Director Jean Luc Godard was asked once why films about ordinary people were not being made. He responded with "Why remake «The Crowd?» It has already been done". The one terrible thing about this film is that, somehow, it is not on DVD.The lack of certain films updated and restored to the current format is, in my opinion, an abuse of the film going public.
Posted by Behemoth media at 6:11 AM 2 comments: