Spiderman: Into the Spiderverse (1918) directed by Bob Persichetti, Peter Ramsey, and Rodney Rothman

Every once and long while a film comes up with something truly new and innovative and this movie is 100% in that category. The story of the Mile Morals version of Spiderman from the comic book series is integrated with several other versions of Spiderman in a truly engaging and exciting story filled with humour and a good share of drama. Spider dies at the start of the films, murdered by the Kingpin, which pretty shocking for an animated film but he is far from the only killing by the end of this story.
Story really is front and centre in this production, but it also outshines pretty much any other modern animated project in the visuals. It is hard to describe the look of this movie except to say it's a comic book come to life. That doesn't nearly cover it though. The animation is far beyond just mimicking a comic book style... it's layered approach and combination of both CGI and 2D to achieve its unique presentation of the material is revolutionary and will change how you look at "cartoons" forever more. Every shot, the lighting the movement is stunning to look at and it's in total service to the top notch story telling and performances.
Marvel knew the Miles Morals story needed to be told on the big screen and came up with a way to do that and not step on the toes of the I've action films. The movie literally references the comics it's drawing from as plot point, including the bizarre, Peter Porker - the amazing Spiderham. As wild and weird as it it is this film has real heart behind it and matches that with technical brilliance. 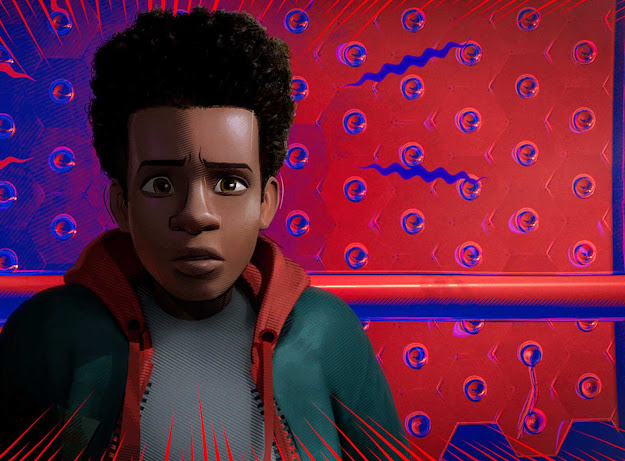 Posted by Behemoth media at 4:30 AM No comments:

Ad Astra ("to the stars" in latin) is a film that attempts to tell the story of emotional and physical detachment with Brad Pitt as an exceptional astronaut put on a mission to find his long supposed dead father who was working near Neptune on a project to discover extraterrestrial life but somehow caused some sort of antimatter reaction in the sun causing intense solar flares that are knocking out electronics and communications everywhere humans have settled in the solar system. This problem, though it is never really shown visually or explained adequately, could lead to the possible death of life in the solar system.
SPOILERS:
Pitt's mission is top secret and in the end he does what all heroes do - he finds his absent father, saves the solar system and himself in the process. If that sounds like a bunch of tropes put together, it is.
Overall, the film is visually stunning with effects that look completely natural, maybe too natural as beautiful as they are, they come off as understated. Brad Pitt's performance is excellent - speaking understated. The other actors, an impressive cast of them including Donald Sutherland, Tommy Lee Jones, Live styler and others follow his low key acting style which keeps Pitt's astronaut from becoming unlikable and cold while letting him remain distant. Even in his emotional painful transition from detached, compartmentalized loner to a more humanized version of himself that realizes he does not want to become what his father was and learns to reach out to others he remains calm, and almost monotone. This is not a critique, it works and Pitt show how good an actor he is by pulling it off.
Where the film falls down is the script. It doesn't seem to know what it is or where it wants to go. It references Kubrick's 2001 Overton enough but throws in elements that distract from what makes that film hypnotizing to watch. A huge problem is the use of voiceover, I am not a fan. It over explains and could have be used sparingly. Instead, we get a constant inner monologue better left to out imaginations and told through visual cues and symbolism. The film and director seem more than capable of succeeding in giving us a purely visual driven story but the script keeps inserting "exciting" diversions like a chase soon the moon and a diversion to another spaceship that has sent out a distress signal. While back of those storylines could have been a film of their own, they come off as attempts to add action and general public pleasing effects and some gore to spice up what should be a much more intellectual and personal journey. They distract rather than add anything useful.
It's east to forgive some of the handwaving and missing explanations in a movie like that, the visual are stunning and we accept right away that the solar flare thing is a McMuffin to propel the story of a man's search to find himself. I do think that spaceships would be less wasteful and instead of dumping sections into space after launch like the Apollo missions did would be more like the shuttle program reuse as much as possible. In the future building rockets on other planets will require more reusability not less. The time to get from one place to another is really short for a film that wants to depict space travel in a realistic way. What should take many years takes a few months and as a result the dialogue about isolation and the long term effects of that loses some of its impact.
The meeting of father and son near the end is a mess. I really did not get any sense from it at all. There is a deep story there but it's hidden in tropes and cliches. If I were the director/writer I might have replaced that section of the plot with the main character getting to the Neptune station and finding out then, rather than earlier that his father had killed the crew and inadvertently caused the anti-matter catastrophe. The father would be found dead and Pitt's emotional journey would  make more sense. Finding out your dad is the jerk you always thought he was in space is less motivating to me than finding out his obsession and detachment and obsession with his one work goal is a much better reason to change your life around to avoid becoming him.
This is a movie that has all the bits and pieces of greatness in it but fails to go the distance because it plays it too safe and tried to appeal to everyone by including needless action on top of what is a slow personal journey. It relies heavily on well worn tropes when it could have veered off into other more meaningful directions.
Worth seeing for the visuals and performances but it is a thinking person's film that falls apart if you think about it too deeply.

Posted by Behemoth media at 6:04 AM No comments: