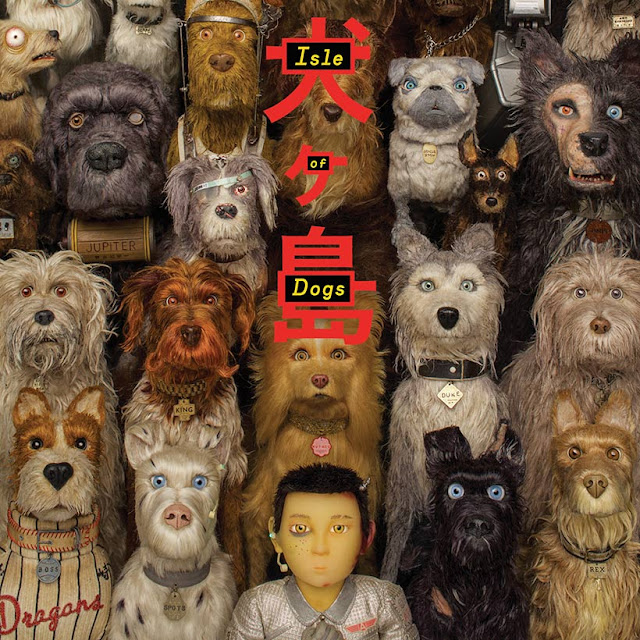 Wes Anderson's animated film is more than a little odd. It is also more than a little amusing, intriguing and daring in its presentation.  It is visually stunning as one might expect from any of his films at this point but it also takes some risks by having some of the dialog in Japanese and remain untranslated, letting non-speakers having the figure out what is going on visually.  While some people seemed to think this was "cultural appropriation" a term with no specific meaning anyone can seem to define these days, I would argue it might be the opposite as it puts the target audience (English speakers) in the position of the foreigner having to parse out what is being in said in a place they do not understand the language.

The story is simple enough. A mean dictator type mayor is holding on to power by making dogs the enemy of the people, sending them to a trash island and demonizing them at every turn. His young ward, however, has flown himself to the island to search for the dog who was charged with protecting him and much of the film is concerned with the search for the dog by the boy and the search for the boy by the government. Little plot details liekthe young girl who is trying to prove the dogs are not dangerous and in the process falls in love with the young boy and the lives of the dogs move the film along at a good pace and keep it lively. The animation is great and unique in its application. The voice actors are pretty good, including Yoko Ono! There are many twists and turns and revelations along the way.

One thing to note: this is not a children's film by any means. There is violence they might find a little shocking and the plot gets pretty dense in parts, not to mention people and dogs get killed and die, throughout.

So while not for everyone, I highly recommend at least giving this movie a try.
Posted by Behemoth media at 1:50 PM No comments: 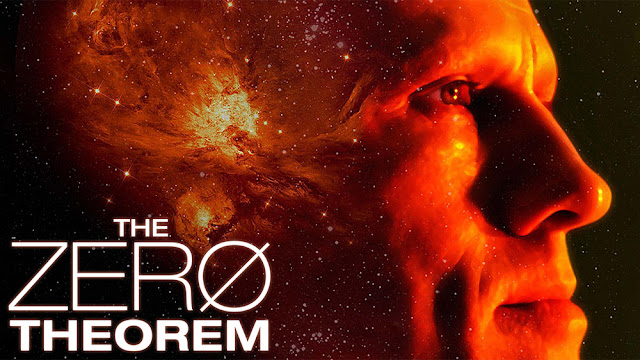 Cohen, a man working for "mamagement" in a distopian future who always refers to himself in the plural is requesting a disability status so he can work from home. The reason for this is he thinks he will recieve a telephone call that will tell hime what his meaning in life is.

He does eventaully get to work from home where he is joined by another programmer, Bob, who is ill and  his somewhat of a love interest, Bainsley who he shares a VR fantasy with.

In the end Cohen discovers that "Management" wants to prove there is no meaning of life. Choen destroys the machine and jumps inot the black hole within it, ending up back in the VR simulation, seemingly content despite management's biting statement that he has basicalling destroyed any meaning life did have for him by waiting for a phone call to tell him wha tthey meaning may have been.

Terry Gilliam is a brilliant dirextor. It's hard to deny that wiht his incredible body of work and he often returns to the same well for inspriation and ideas. This film, however, it pretty terrible. Despite some great actors, set peices and wonder Gilliam imagery, the movie comes off as a cheap copy of a Gilliam fim done by a much lesser filmmaker. The lead is good enough but the overall lavk of sympathy generated for him, or anyone else drags the story down. In Brazil the protagonist is relateable  and we care what happens to him. The world is a knockoff of the world of Brazil or maybe 12 Monkeys and never quite seems liek a real or interesting place. I do like that we see it in braod daylight so it doesn't fall into the distopian trope of "always raining and night".

Overall, a disspointing entry into the director's mostly great catalog of work. 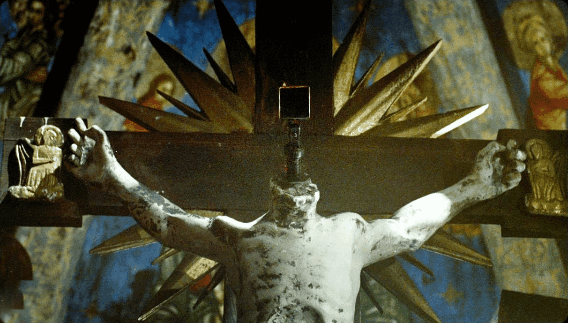 Posted by Behemoth media at 8:40 AM No comments:

Based on the poem by Edgar Allen Poe, this was my longest single animation to date at 9 minutes. Michael Z. Keamy did the narration and it was a solid 5 months of full time work to get it done.

This time out with the addition of simple sub-titling tools added to Final Cut X, I was able to add French and English captioning so more people can watch and understand it. I tried for a sombre but realistic tone to present to poem. I have seen a few animations that go wild with abstract shots and ideas but I wanted this to keep grounded. It was a challenge to make something that is basically some depressed dude yelling at a bird in one room for nine minutes until he passes out! I started with longer, lingering shots and then made them shorter and shorter as it progressed to give it a faster pace while keeping the ideas of grief and depression to the forefront.

If you have tried to leave a comment on this site, or my home page... or any blogger site it seems, you likely were prevented from doing so over the last few months at least. I have tried to contact google but no response and while there are rumours of improvements coming, I would not hold my breath. It seem likely blogger will cease to exist at some point and this version of the blog will dissappear.

If you want to comment still, please do, just send it to
nomi02118@gmail.com

If you have suggestions for free blog sites like blogger to switch to, I'm all ears!
Posted by Behemoth media at 8:45 AM No comments: