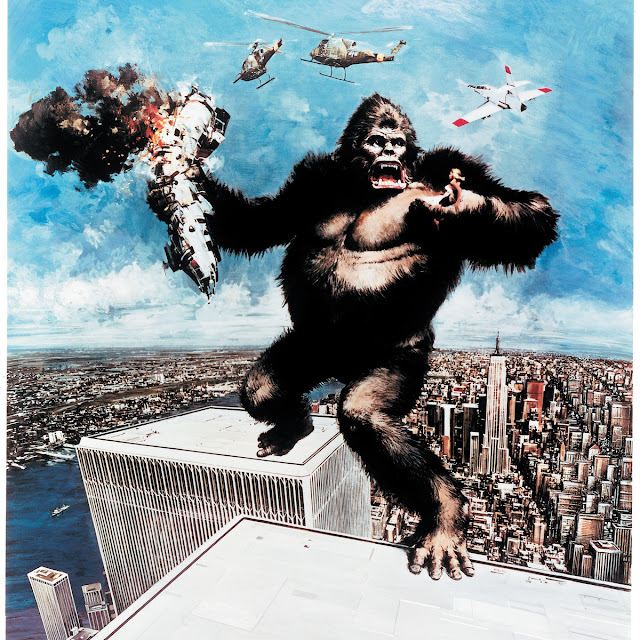 The 1976 remake of King Kong was a BIG deal. Firstly there were two version set to come to the big screen, this one and another that was to use new stop motion animation techniques to update the classic film as opposed to the guy in suit this one used.  Secondly, once this version as set to go, the ad campaign for it was enormous. Posters, bubble gum cards, you name it. They pulled out all the stops to make sure everyone on earth near a movie house knew this film was coming.

Since it follows more or less (mostly less) the original classic film script, there is no real need to recap it here. It is an updated telling however and the adventurer film maker Carl Dedham is replaced by Fred S. Wilson, his 70s evil petrol magnate version ( now plated by Charles Grodin) who wants to exploit Skull Island for oil, but when that doesn't work out, he decides to kidnap the giant gorilla living there and show him off to reduce his losses. Ann Darrow is now called Dwan (seriously, she is) played by Jessica Lang in her first role and she is, in a word, terrible. Funny, but terrible. She made good use of her 3 year work hiatus after this movie to really learn her craft and become the great actress we know now. Her lover, Jack (Jeff Bridges) is now a palaeontologist who stowed away on the boat going to Skull Island just in case there was giant monkey there. The Empire State building was replaced by the ill-fated Twin Towers that had recently been completed. 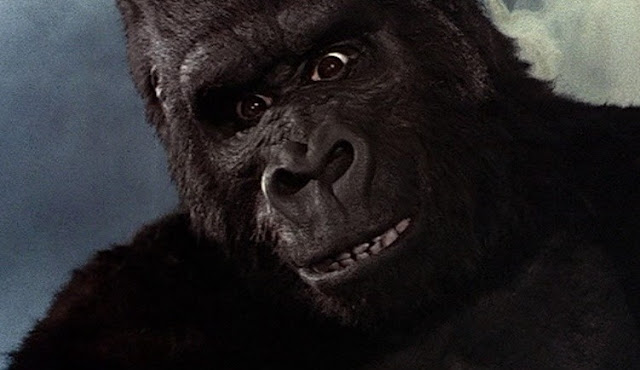 For reasons I cannot fathom, reviews for this movie were pretty good all around and the praise for its effects were almost universal. The script by Lorenzo Semple Jr, who is one of my favourite writers from the time he wrote the Batman TV show to his amazing campy update of Flash Gordon, is uneven at best and totally inappropriate and plain wrong at worst. It is really funny at times, but this flies in the face of how everyone else in the production saw the project. He seems the only one to get the joke. Because of that humour, I find it hard to just trash this film for the pretentiousness Dino DeLaurentis had to take on this big budget update of the RKO classic and still find it enjoyable in that "bad film" way.

To be clear: This film does not hold up. I liked it well enough at the time, there were few effects movies to compare it too until Star Wars came along,  but the effects are all pretty dismal. I don't know where the high praise for them came from. Bad matte work, and a monkey suit that was disappointing even to its creator, the very talents Rick Baker. The biggest issue is the lack of scale. Kong never looks any larger than a guy in suit walking around miniature scenery. He has a range of facial expressions from angry to rape-y pervert eyes when Kong looks at Dwan - which is uncomfortable to watch to say the very least. The updated touches are ridiculous as well. Kong is rolled out in New York City in a giant gas pump. For about 2 seconds the suited actor is replaced by a full sized robot (with 2 left arms) that was made solely for the purposes of giving the impression before the film was released that the monster would be the giant robot throughout. The end scene is totally banal and meaningless. There is no "Twas beauty that killed the beast" in this film.

And...good god, there was a sequel. King Kong Lives that was MUCH worse. 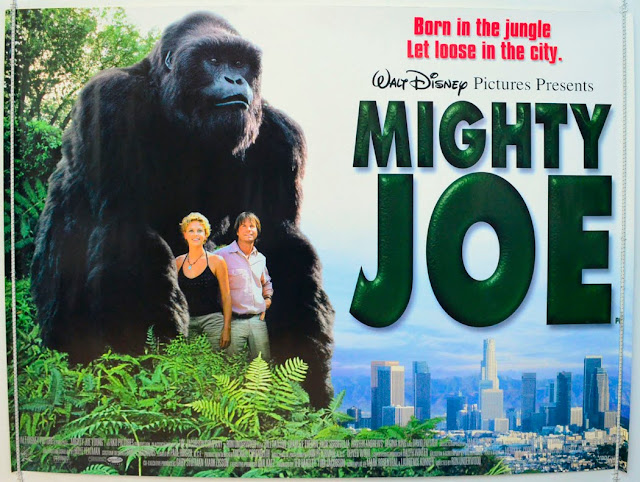 While this film is not a classic either, it does satisfy the giant ape desires you might have much better than the Kong remake. The story is serviceable, light and fun. Made by Disney for 90 Million Dollars, it only grossed 50 million. I can't explain why it flopped while Kong was box office gold. Rick Baker returned to try again to make a believable ape suit and this time it works in spades. Mixed with a digital version of Joe, it is impossible to tell which is which and the scale and believability of the giant ape is worth watching the film for. Charlize Theron also gives a great performance as does Bill Paxton.

Posted by Behemoth media at 2:04 PM No comments:

Nicolas Roeg has worked on many films and Tv projects but his output as director is relatively small, only 14 films total. Starting out as a cinematographer on films like Lawrence of Arabia and Truffaut's Fahrenheit 451,  he earned a reputation for excellence - and eccentricity.

As a director he developed a style all of his own and hard to describe. He was able though editing, to pass the limits of space and time with a seamless cut or fade. many of his cuts would take you into the past or mind of the character and then back again with ease that only Roeg has ever accomplished in my opinion. It makes for fascinating, complex and sometimes confusing works of art.

He also broke the mold by hiring musicians as actors, rock musicians in particular. He saw in them the ability to project an image on stage that, while not traditionally acting, was nevertheless engaging and presented characters in a way trained actors had not done before. 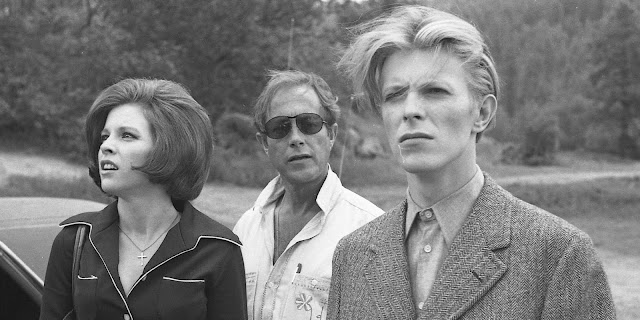 Despite his acclaim and influence, not many, if any, of his movies were considered financial successes. Even his adaption of Roald Dhal's The Witches which boasted an over the op performance by Angelica Huston and puppetry by Jim Hensen's studio never made a splash a the box office that it should have. Even so, Roeg films had star power behind them. Actors like Donald Sutherland and his ex-wife Theresa Russel appeared in a several projects as did Christopher Loyd and Gary Oldman.

While the movie studios and theatre chains might not have given him the respect his work deserved, a couple generations of actors, film goers and critics (me included) mark him as one of the great filmmakers of all time. 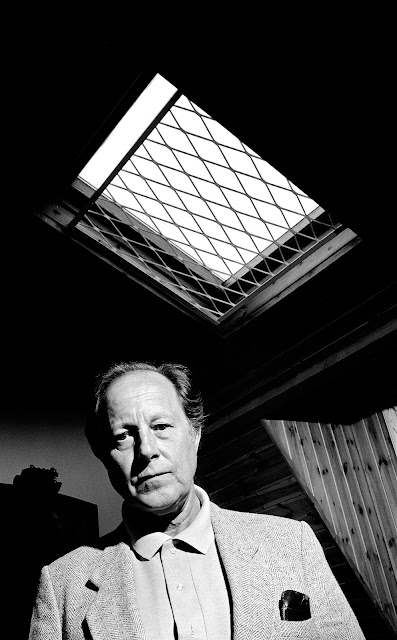 Posted by Behemoth media at 1:54 PM No comments: