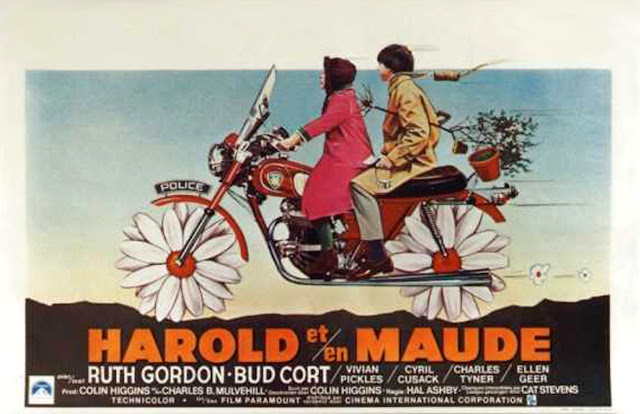 My first experience with this film was at the Harvard Square theatre in Cambridge, MA somewhere around 1979-1980 and was, maybe appropriately so, an odd one. As I approached the ticket booth I was pulled aside by the cinema management and I immediately thought they somehow knew I had a bottle of vodka hidden in my coat pocket but it was much stranger a reason. I was told I was getting in free for my excellent costume… apparently I looked exactly like Harold and for a free ticket I played along. I have never seethe movie, not did I know much about it but I have to say - they weren’t wrong - I truly did look like I was dressed as the main character. I left the cinema with a new favourite film that night and I had barely touched the vodka I bought.

The story is quirky and certainly not for everyone. The humour is pretty dark but the emotional responses it brings are equally bright. Harold is a rich teenager, emo and goth long before they were a thing who tries to get his mother’s attention by faking suicide on a regular basis. He goes to funerals for people he doesn’t know and that’s where ehe meets Maude, a woman close to 80 and they fall in love. Maude is a firecracker, interest in death like Harold but a lot closer to it, in so many ways we discover as the film goes on, that she is hell bent on living as full and crazy a life as she can. She steals cars and trees. She poses nude. She teaches Harold how to live free and to enjoy what he has.

There is a dark side to the humour and a dark side to Maude. Harold’s suicides attempts go beyond bad taste as his mother tries to set him up with various young girls to marry. He sets himself on fire in front of one and in a very funny scene stabs himself in front of another who decides he (rightly), like her, is acting and then she stabs herself. His mother checks in on them to see him standing over her in a pool of fake blood. Maude gets him out of military service by faking her own death at his hands and his military uncle does not call the police but instead decides to cover it up. The most poignant part of the film passes so quickly many don’t see it on first viewing. As Maude and Harold talk, he see a number tattooed on her wrist. She was a victim of the holocaust, she never says anything about it but it becomes obvious that a lot of her outlook and behaviour is coloured by that terrible experience. 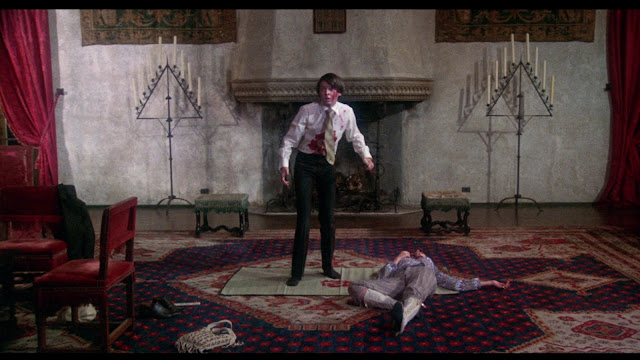 Then ending of the movie is either unbearably sad or life affirming depending on what you bring into it yourself. Maude had decided long ago to kill herself at 80 and despite Harold proposing to her she goes through with it, leaving him screaming and crying in pain and grief. He brings his sports car turned into a here to cliff and drives it off the edge. But he hasn’t killed himself, he has killed that old morse part of himself and plays the flute Maude gave him as a gift and walks away from the cliff’s edge.

Critics and audiences did NOT like this film on release, it was too strange and morbid many thought. I suspect the idea of a teenager having sex with an elderly woman was also a huge factor and for that reason I think the film missed out on the second life many others get on TV after the theatrical run is over.

Colin Higgins who wrote the original story, had a prequel and sequel planned, but they never materialized. Maybe that is for the best, it’s hard to imagine adding more to this story in any way that would work. There have been many stage productions in both English and French that I have somehow managed to not see over the years.

Ruth Gordon is so amazing as Maude you’ll never forget her performance. She is inspiring. She lived in nearby Quincy when I lived in Boston and gave a talk a the Boston Public Library that is was privileged to attend. She did not disappoint. Bud Cort as Harold was also inspired casting.

Does the film hold up? It’s still one of the oddest and funniest films made so if you have not seen it, give yourself a real treat and do it NOW. 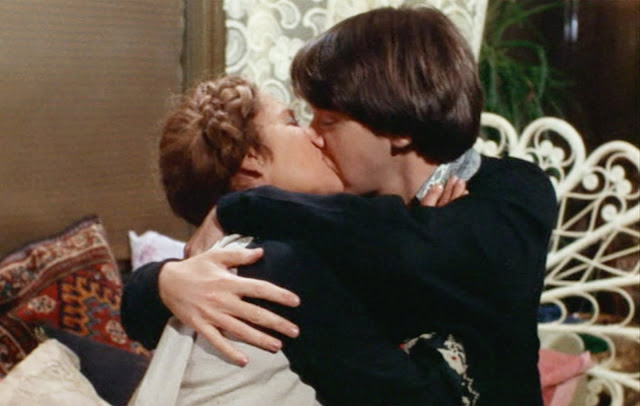 Posted by Behemoth media at 6:38 AM No comments: