My Dinner with Andre 1981 Directed by Louis Malle 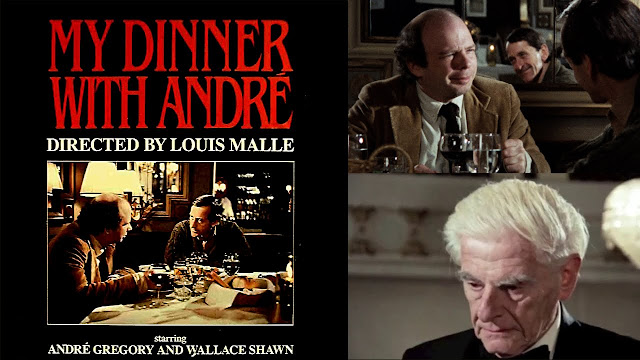 When I saw this film in 1981, at the urging of my roommate at the time, it was a phenomenon in Boston and played for a year at the cinema. People took sides on who they thought was "right" in the conversation in the film.

The synopsis could not be more simple to describe. Two old theatre acquaintances meet for dinner and talk about their lives and everything else. The film had a very modest budget of 475,000$ but made over 5 million on release, a great success by any reasonable person's standards. It was one of the most talked about films on the art circuit of that time and found itself referenced and parodied for many years to come.

The filming by Louis Malle is not complicated and he rightly concentrated on the faces of the two principals and occasionally the waiter, who is pretty neutral throughout - but that neutrality led quite a few movie friends at the time to read DEEPLY into his performance. A little too deep, I thought.

The writing is exceptional as a film about two people talking over dinner could have been boring as hell, but this is far from that. The conversation is light an comedic much of the time but also delves into two points of view about what life is all about. One is very hippy-dippy, if I might say that, and seems to come not just from a deep curiosity but also from a privileged financial state that allows someone to explore their curiosities without worrying about mundane things like paying rent.  The other perspective is much more down to earth, also curious and intellectual but bound by the need to live in the real world, make living and deal directly with those around you - like it or not. Just to be up front about it, this conflict is not settled by any meany by the movie's end credits and that is one of it's strengths.

A myth that has grown around the film is that it's biographical because the two actor are playing themselves to a large extent. This is not the case, while the event mentioned are from their real lives more of less, Wallace Shawn and Andre Gregory have made it clear that they could have switched roles and would if there was a remake. It's a piece that references their personal lives but isn't about them personally.

My Dinner with Andre is the sort of film you pretty much never see anymore, willing to find the discussion of deep subjects interesting and worthwhile for their own merit and , indeed for the pleasure of it. It opens the way for conversation after it's over and oddly, is not pretentious but funny and eye opening without taking itself too seriously. The power of this film is it doesn't tell the viewer what to think, but instead give the viewer a lot to think about.
Posted by Behemoth media at 9:28 AM No comments: