This went faster, much faster than Music of Erich Zann (which took 5 years to get done) but I think I managed to improve in several areas. The characters talk, there is depth of field in the shots and I think I boiled the story down to its essential elements. My voice is terrible, of course, but what can you do?

Problems still abound. The character modelling is not much more advanced than the last film, the rigging is better but still not where I think it should be. Texturing of the sets is fine but I am looking into a way to hand paint characters and objects with a software outside of Maxon's C4D Bodypaint which I have yet to get to work right.

Always so much to learn and improve!
Posted by Behemoth media at 12:05 PM No comments: 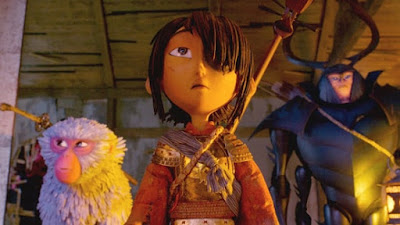 The film studio alike is by far the most innovative animation studio around these days. Previous films, Coraline, Paranormal and Box Trolls are all great films and in many ways expand on who animated films are aimed at and have stories no other studio is telling. They are all done primarily with puppet animation with a smattering of CGI for practicality and enhancement.

The story of this film is maybe the weakest point of this film. My husband got detached from it about 15 minutes in but I can't say that's normal. I thought ti was a little weak but it kept my attention the entire way through. Some of the plot elements arrive WAY too easily... there is a quest to find magical armour elements, a sword, a helmet, armoured suit... but this aspect is over taken by all the other elements and gets puts the background and pretty much forgotten by the end of the film. None of the searched for elements make a notable diffference in the story.

Basically a young mother has saved her son from// something and hides him from the night near a small village. She and her son have magic powers which at fort consist of him making origami come to life to tell a story, his story it turns out. His evil grandfather sends his scary aunts to get him when he accidentally stays out too late and the adventure begins. This is not a children's tale,I'd recommend it to young teenagers and about... there is killing and death and main character die and do not come back despite having magical story elements. I can't speak to the voice talent quality as I saw it in French. The only voice in the English version I wish I had heard was George Takei, who is amazing in anything he does.

One thing anyone watching the film can not ignore is the visuals. They are more than AMAZING. I am a little biased towards this sort of technique as I used to de-rig (take out the supports and wires) of the puppets in these sort of projects, so I am well aware of the effort it takes to pull them off. As with their other films, the end credits have some behind the scenes clips off people working on the puppets. This really adds to the experience as you get not only an idea of how time consuming it is but also the skill it take sot making the puppets and set.. which are enormous in some cases. The giant skeleton is about 10 feet tall and animated frame by frame. 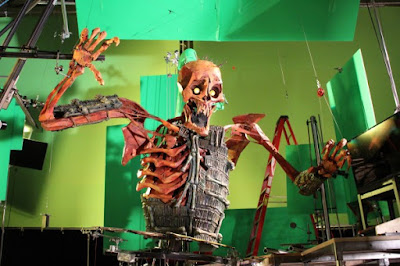 *note
the Slammer seems empty these days and abandoned by all the writers, including me. I just haven't had time or money to see anything but I hoped hat will change in the fall. I have a LONG list of thing to catch up on.
Posted by Behemoth media at 3:29 PM No comments: