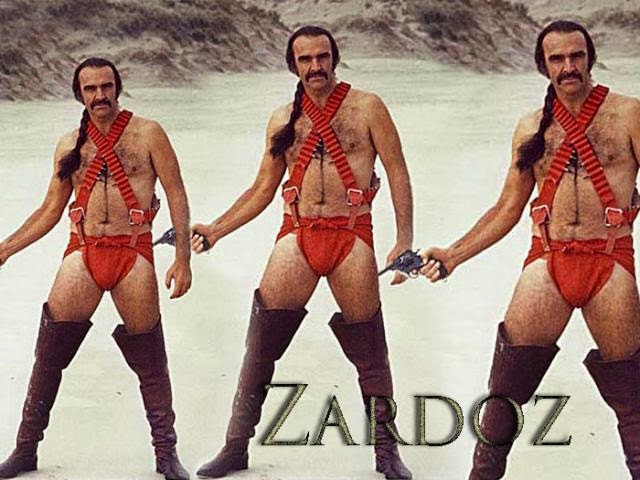 John Boorman's 1974 film seems to be in the zeitgeist lately and getting attention from film critiques and cult film lovers. Long lauded as a terrible film, a fresh look reveals a movie that isn't any worse than others with similar subject matter. That is not to say it isn't weird as fuck.

The film's bad reputation might stem from star Sean Connery's outfit. It can not be unseen once seen and a Vegas stripper would be embarrassed to be seen in it. This is unfair since we don't really see much full body shots and he does eventually get a proper pair of pants. Besides, everything else about this film is at least as bizarre. Plus, he also wears a wedding dress. 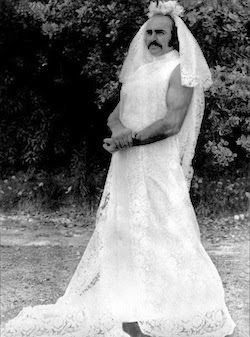 The film starts with a floating head wearing a napkin Egyptian style identifying itself as Zardoz as it moves around the screen never blinking. Then we are treated to a bunch of male Barbarella warriors taking orders from a giant flying stone head that tells them "the penis is bad, the gun is good!" As it vomits rifles all over them like some sort NRA wet dream. Connery hides inside, which is filled with people in giant condoms, and eventually he finds and shoots Zardoz who has been hiding(?) up until then. The head lands in a secluded area where a superior race with psychic powers and superior technology lives, and lives and lives. Apparently they are all immortal and bored even with charlotte ramplings breasts to entertain them. The men are all super feminized since they don't have sex any more and rebels are punished by aging them a few years with each infraction. How the earth was divided into barbarians and magic hippies is never explained or even hinted at. Our hero is of course some sort of chosen one, destined to free them from the boredom of eternal life and restart the human race, or something. Oddly from the dialog, none of the never dying hippies is really all that old, most seem to be around 140 which doesn't seem nearly long enough to develop magic powers, lose your sex drive and force men into bad wigs and roman tunics. It certainly isn't long enough for all the bitching they do about not being able to die.

Of course there are plenty of other elements, plot lines and psychedelic sequences with films projected over the actor's faces and bodies but I wont spoil it for those who haven't yet seen it.

The surprising thing is, none of this makes a truly bad movie. The basic plot is standard dystopian low budget sci-fi of the era and some of the cinematography is pretty good. Even the flying stone head head is very well done. It does drag in parts, but no more than many films from the time compared to our frantic low attention span editing of today. It would no doubt have benefited from a better attempt at world building, giving at least a hint of how the world got to where it ended up but it's not boring, just confusing. And weird. Very weird.

Posted by Behemoth media at 8:49 PM No comments: