Resurrect Dead a superbly directed documentary on the Toynbee tiles phenomenon. Now on Netflix. I'm going to avoid waxing - if you disagree after seeing it - let's duke it out then. One caveat: the Wikipedia article will definitely spoil it for you, so read it afterwards.
Posted by glyphjockey at 4:15 PM 4 comments:


ne of the greatest nights of my life was with wonderful Tova Borgnine's makeup artist extraordinaire David Frank Ray (among many others), who took me as his date to Ernest Borgnine's birthday party. It was a surprise party, held at Elvis Presley's former Beverly Hills home (which we didn't know until the way out, when our table-mate Harry Hamlin wondered why there were photos of The King in the hallway. Had we only known that the Robin-Hood-like fireplace was once graced by Elvis and the Memphis Mafia, it would have only made the party even better, but singing "Happy Birthday" along with  Debbie Reynolds (who ribbed fellow guest Connie Stevens about their mutual husband Eddie Fisher) really didn't get any better. Ernie made fun of his "I masturbate a lot" gaffe and how "that guy on the radio, Howard Stern" made it so "even the guy who fixed my back this morning had to ask me!"

It was a small gathering and I got to meet him. I told him "I was going to ask you-you know, but I figured that joke was old already." He burst into that famous Borgnine laugh and gave me a big hug and a kiss. What a guy! 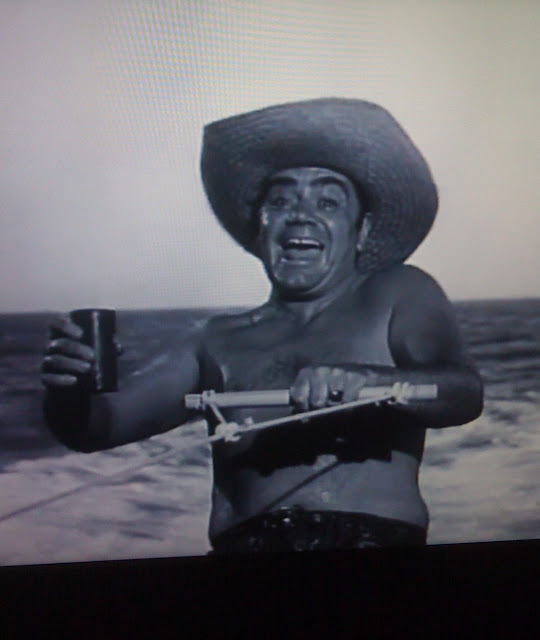 (There are more stories from that night as you can guess, but this is about Ernie.) This picture has been the wallpaper on my cel phone ever since that night because it just reminds me to not take life so seriously.

Posted by glyphjockey at 5:40 PM No comments: